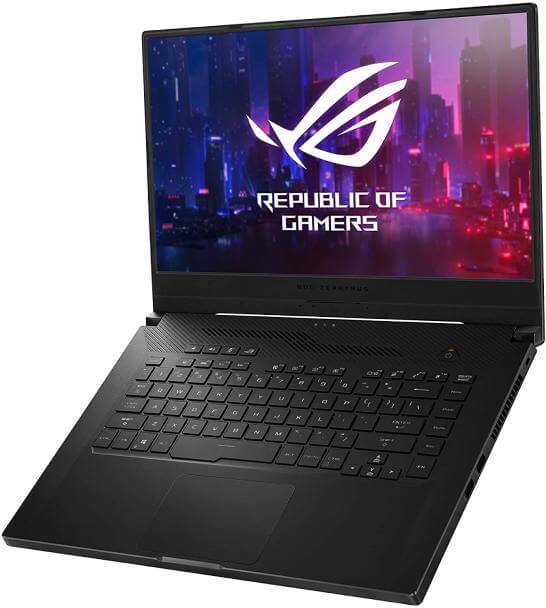 If you are searching for a gamer laptop that has AMD’s powerful CPU, the Ryzen 9, 16GB of RAM, and 1TB massive SSD rather than those usual 512GB, consider reading this review.

The 15″ 240Hz Zephyrus G15 GA502 ultra-slim gaming laptop has a special appearance that other gaming laptops do not have, which is super elegant looking. You almost can’t see that it has the superpower to intensively game on the go. The appearance is just not a gaming-aggressive. For a complete specs list, visit their product page.

Obviously, this will not be the lightest and portable gaming notebook you will ever see, but it is very light in its category. Want to carry it around? No worries, you can easily tuck this laptop into your backpack and go. Also, want to open the lid with one finger? No problem, you will be able to do that. This is amazing considering the laptop itself is a sturdy device, yet it can maintain to be not too bulky.

The major bonus of the screen is its 240Hz refresh rates. For the price that it is currently at, the 240Hz screen is very rare to find. It is a very nice screen with astounding color. In short, it’s probably the best screen on a gaming laptop at this price. A lot of expensive gamer laptops do not have this high-quality screen.

The video below demonstrates how a 240Hz screen’s refresh rates perform compared with lower refresh rates. The graphics appear to be much smoother, with literally no stuttering.

The higher refresh rate your screen has, the more frames it can refresh which will result in a smoother video graphic.

The screen is also Pantone validated and has adaptive sync. Meaning it has higher color accuracy, 100% sRGB, and 75.36% Adobe RGB color gamut. So this is an ideal screen for not only gamers but also content creators. A great screen if you often use software like Photoshop, Adobe Premiere.

Choose the screen that has 97% sRGB or higher for optimal color accuracy.

Furthermore, the screen has a 3ms response time. The response time of the screen is very important if you buy a notebook to game. Having displays that have lower response time will result in better image quality and clarity in your games. In other words, your screen can minimize the ghosting of your game’s graphics.

Opt for a screen with faster response time, so you won’t have blurry moving objects.

Everything that you want on a gaming monitor, this ROG Zephyrus G15 GA502IV-PH96 has them.

Enough about the screen, let’s move on to the performance of this this ROG Zephyrus G15 Ryzen 9 model.

This ultra-slim gaming notebook comes with AMD Ryzen 9 4900HS processor and NVIDIA GeForce RTX 2060 Max-Q Graphics with 6GB dedicated GDDR6. The powerful CPU and GPU are partnered with 16GB of RAM and a massive 1TB SSD for storage.

The total L2 and L3 cache values are 4MB and 8MB respectively. What is more, this chip was produced with a 7nm TSMC process, which can double its performance.

As for the RAM, it’s a dual-channel memory, 16GB (2x8GB) DDR4 module, which runs at 3200MHz and expandable to 32GB by replacing the one memory stick. The 8GB RAM module is soldered to the motherboard.

Massive Storage in this GA502IV-PH96!

Gaming portable notebook at this price usually has a maximum of 512GB SSD storage. This bestseller from MSI for example costs more, and it has less storage space. But this GA502IV-PH96 has a massive 1TB SSD rather than 512GB.

For the current price (when this review was published), it’s definitely a steal. So, we recommend you to get it before the price increases, as the pricing can be crazy sometimes. I mean, this Zephyrus version that has older CPU (Ryzen 7 4800HS) costs currently more than this one we are reviewing.

As for the storage, ASUS did not only add its pre-installed SSD, but they also leave another slot empty for another storage upgrade. This Zephyrus G15 GA502 has one empty M2 SSD slot.

Note: If you decide to upgrade, please be sure to ask the seller first about the warranty policy. The upgrade will probably void your warranty.

That’s right! This Zephyrus G15 GA502IV-PH96 equips the RTX 2060 Max-Q from the NVIDIA GeForce graphics line, which is a powerful GPU. This means it supports DLSS (Deep Learning Super Sampling) and Ray-Tracing. There will be more and more games that will be released this year that need these supported features.

If you look for an ASUS ROG that has RTX 2070 GPU, the big brother Graphics, the ROG Strix G15 is worth checking out. For the 17-inch RTX 2070 ROG, we recommend this model (Strix Scar).

By the way, DLSS and Ray-Tracing are NVIDIA technologies that maintain the performance and graphics quality in real-time when you are playing games.

Basically, you will be getting a future proof gaming laptop! Learn more about DLSS and Ray-Tracing here.

With these impressive technical features, it goes without saying that you will be impressed with its performance. This laptop can play most of the popular new games at the highest setting and high FPS.

The examples of the high-end games that can be played on this ROG Zephyrus G15 Ryzen 9 laptop are Doom Eternal, Gears Tactics, Hunt Showdown, and Escape from Tarkov. All of these games were released in 2020, and of course, the laptop can handle older games as well without issues.

Shocked to see the price!

As I mentioned earlier, this Zephyrus G15 GA502 is definitely a steal. It’s slightly thicker than an Ultrabook but you will be getting way more power with this device.

Furthermore, it’s pretty difficult to find a gaming laptop that has the specs and quality like this one has for the 1300 dollars price range (price can change quickly). Especially the 240Hz screen and 1TB SSD storage.

In closing, if you value portability, sleekness, and power in a gaming laptop, this laptop is the best choice for the price. It is so sleek yet has a lot of power right out of the gate.

I value a very portable gaming laptop that is not bulky and gigantic that can make it unpleasant to carry it around. This ROG Zephyrus G15 GA502IV-PH96 can provide that ultimate portability, and a whole lot more. 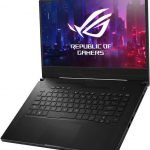 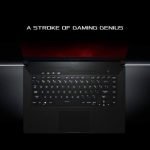 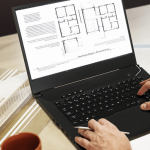 We use cookies to ensure that we give you the best experience on our website. If you continue to use this site we will assume that you are OK with it.OKPrivacy Policy